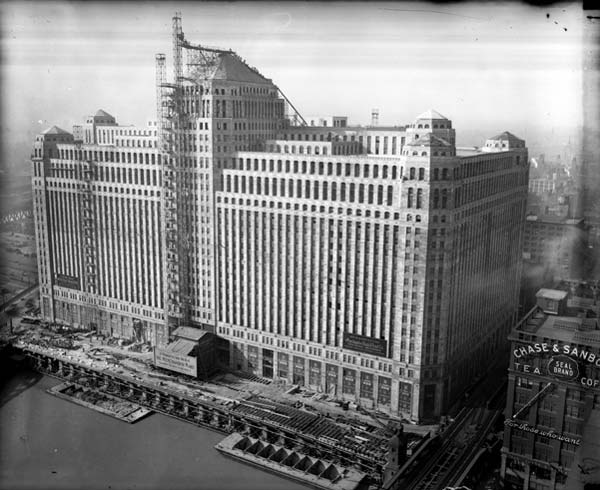 As we start planning our inspiration and shopping trips for the year, we’re reminded of this fun trip from the fall when some of the MDI team went to the Merchandise Mart (a.k.a. theMart or The Mart) in Chicago.

Alex, Lily, Margaret, and Ryan headed to Chicago for a weekend of exploring the design behemoth. Built in 1930, the two-block building was developed by Marshall Field & Co as a central marketplace where retailers could buy wares under one roof.

Located on the Chicago River, theMart is an Art Deco style building that is part warehouse, part department store, and part 25-story skyscraper. Today theMart is still the world’s largest commercial building and largest wholesale design center, and the MDI team got to explore all 42,000 square feet of it.

The architecture of the building is an inspiration in itself. Built during Chicago’s golden age, the lobby is filled with marble and terrazzo and crowned by a newly restored Grand Stair, and 17 Jules Guerin murals celebrating global commerce. The building recently underwent a massive renovation and was awarded LEED Silver Certification in 2007 and LEED Gold Certification in 2013 and 2018.

During the day, the MDI team explored theMart’s design showrooms, including vendors such as Artistic Tile, Lillian August, Benjamin Moore, David Sutherland, and Broome + Greene. Evenings were for downtime in Chicago, dinner, and recharging for the next day. Before the designers headed home, everyone refreshed tired feet with a pedicure before jetting back to Charleston, full of inspiration.