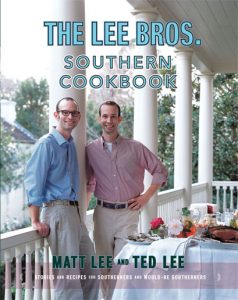 We’re all cooking at home more so this week we thought we’d share our favorite Southern Cookbooks. If you have a favorite, be sure to let us know!

Matt Lee and Ted Lee, native Charlestonians, food and travel journalists, won a James Beard Award for Cookbook of the Year in 2007 with The Lee Bros Southern Cookbook. Their cookbooks are full of sweet narratives, funny anecdotes, and recipes that will have you whipping up authentic Southern food in no time.

Carrie Morey had one goal: Share her mother, Callie’s, biscuits with the world, or at least with Charleston. With in the first few days of opening on Upper King Street, lines were out the door. Before long, Callie’s Hot Little Biscuit had expanded to Atlanta and Charlotte. Her cookbook, Callie’s Biscuits + Southern Traditions is a modern approach to traditional Southern fare. That means less time in the kitchen and tasty culinary twists. We also love her blog, which is full of recipes and stories.

If you’re new to Southern cooking, this is the recipe book for you. Margaret Agnew’s weighty 300+ page classic, Southern Traditions Cookbook, teaches the foundations of Southern dishes and is full of beautiful photos. Full of delicious desert recipes, this is the book many Charleston cooks reach for at the holidays.

From the editors of Garden & Gun, The Southerner’s Cookbook highlights favorite Southern dishes, cocktails, customs, and more. Part story-telling and part cookbook, this is the book we like to give as a hostess gift (or any kind of gift!).

First published in 1950, and the oldest Junior League cookbook still in print, Charleston Receipts is a must-have for anyone who loves Charleston. The book not only contains a whopping 750 recipes, it’s full of Gullah history and art by Charleston artists. The recipes are a snapshot of the adventurous and odd 1950s cooking scene and serves as a link between Colonial Charleston and the 20th century.

For the Love of the South: Recipes and Stories from My Southern Kitchen

Amber Wilson’s latest cookbook was named one of the best books in 2018 by Garden & Gun. The author tells stories of growing up on the bayous of Louisiana, and includes gorgeous black and white photography with her recipes. Family stories, history, and delicious recipes for fried okra, popovers, roux, and other Southern staples are fun read for cooks.

Chef Sean Brock’s Heritage won a James Beard Award, a Julia Child First Book Award, and was a New York Times best seller. This cookbook highlights Brock’s favorite dishes inspired by his love of heritage foods of the South. Brock is an eloquent writer as well, so home chefs will enjoy his essays about growing up in Appalachia and the characters that are part of his drive to preserve traditional ingredients.

In Southern From Scratch, author Ashley English teaches home chefs how to build a Southern pantry with basic ingredients. With degrees in holistic nutrition and sociology, Ashley offers recipes for pickles, jams, relishes, vinegars and more.

Kim Nelson’s yummy Daisy Cakes Bakes is one of our favorite gifts to give at a wedding shower. The photos are gorgeous, and Southerners are nostalgic for confections from Daisy Cakes in Pauline, South Carolina. Besides mouth-watering recipes, Kim shares stories about growing up Southern.

Pie is central to life in the South, yet they are deceptively difficult to get right. Mercifully, Southern Baked by Amanda Wilbanks has one pie crust recipe then expands on different fillings, shapes, and sizes. If you like pie, and who doesn’t, this book should be in your kitchen library.